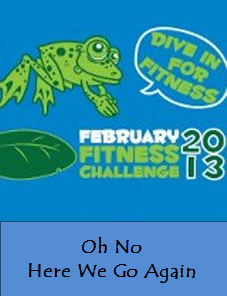 Everything was going so beautifully at the beginning of January; I was just beginning to settle into a swimming routine and hitting the mile a day target when I was absolutely knocked for six by a proper dose of flu which confined me to bed for three days.

I've been pretty ropey and wobbly ever since, but on waking up this morning I realised it's now February, bringing the February Fitness Challenge and my attempt to swim for 28 consecutive days. I nearly missed it because I left my swimming gear at home and I became embroiled in a protracted, pathetic but ultimately blood pressure elevating hearing over lunchtime.

Featuring a numpty judge who hadn't read the papers (to be fair the latest welfare report hadn't made it onto the court file) and clearly had a lunch date planned as he kept studiously looking at the clock as I was addressing him. He finally wanted to know why the case was being heard in Newcastle and not Durham "well Judge because it was incorrectly issued by my esteemed colleague last August, and the learned Judge at the time (oh that would be you!) decided to hang onto it rather than transfer it out."

On returning to the office fizzing and foaming I decided that a swim ( under the guise of a late lunch) was needed to calm down. I wasn't really up for it and therefore was thinking about settling for a Tesco set and wondering if I could get away with 500 metres. However an empty pool, well ok one other swimmer for company to start with, and then a big bloke appeared next to me so I had to keep beating him didn't I? This meant that before I knew it I had worked my way through a fairly gentle 2k which was a pretty good Friday distance.