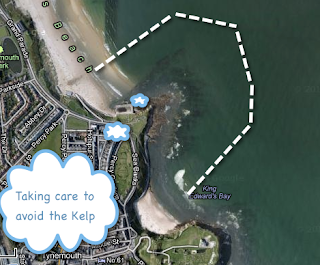 It's a bank holiday weekend and there's only so much DIY and gardening a girl can take, so looking for something different I did what every self respecting Geordie does on a bank holiday...

I headed for the beach,

Now the North East is blessed with a coast line and beaches to die for and the usual indifferent weather (aka wet windy and wintry) ensures that they are normally deserted; but I wasn't going to lounge around on the sand, oh no! my mission had intent and purpose.

I was planning my first open water swim of the season, (hell my first swim anywhere for over three weeks) and it should be born in mind that I've never swum in the North Sea (apart from the obligatory few strokes as a kid) or the sea in general except off the Barrier Reef or the open water swim at the Europeans in Majorca.

Sparky Walton has been on at me to come and join the Tynemouth Outdoor Swimmers (hereinafter referred to as Tossers) for months and I had thought that I had dodged that particular bullet by saying he could let me know when the water reached 12°c. Well I was mulling over making my open water debut  this year sometime over the weekend and missed a slot at Ellington (a balmy 13°) and Hetton Lions Park (10.5°) and suggested to my better half that a trip to Tynemouth might be interesting.

This proposal was met with hoots of derision and a wave of negativity from both Bob and Teenage Triathlete who suggested that it was too cold, too wavy too windy and I just didn't understand what I was letting myself in for and I'd never manage it.

That was all the motivation I needed, I have this quirk in my personality that if someone tells me not to do something well I just have to prove them wrong and here I had not one but two people of very little faith! Having determined to make the afternoon slot, Bob's expression of support did run to providing me with a dry robe, a pair of wetsuit bootees and the offer of his neoprene cap (you see he does care really).

So I set off and arrived after a detour to B&Q and to dispose of Teenage Triathlete for a sleepover (well mum I've all week to revise for my History GCSE!).

Of course having arrived and recognised a number of people there was no backing out a quick (ish) change and we were off....

Now when I said here and here that the water was ffff freezing, I know now that I was only joking, because this afternoon I learnt the true meaning of the term ffff freezing, the surface temperature at Tynemouth was reckoned to be around 8.2°. As soon as I stepped into the water the pain in my feet was simply excruciating and I genuinely thought as I walked through the breakers that I was facing a humiliating retreat to the dryness and warmth (it's all relative isn't it) of the beach. 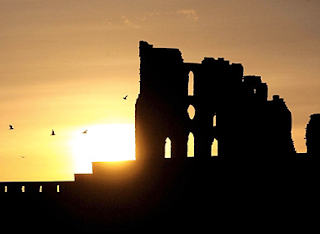 Surprisingly though I managed to start swimming and keep going and bit by bit began to really enjoy the swim, especially as we rounded the headland and were faced with a view of Tynemouth Priory, spectacular and completely different from the sea.

A bit of body surfing as we made it to King Edwards Beach and then it was the return leg, masterfully guided by Jimmy Bridges who kept us out of the Kelp! (I've mentioned before here and here my fear of swimming over frondy things in the water) At this point I'd been in the water for about 27 minutes and I thought about getting out and walking back to collect my gear, but I realised that my numb and freezing feet would make the walk back simply agony and I would feel every pebble or crack in the pavement. The swim back seemed much the lessor of two evils.

I was deposited on the beach some 27 minutes later, and despite my sensation deprived extremities, felt completely exhilarated, tingly and alive. I have yet to master trying to put on a t-shirt and hoodie simultaneously under a dry-robe but I'm sure given time that is a skill I will master can't wait for my second swim. 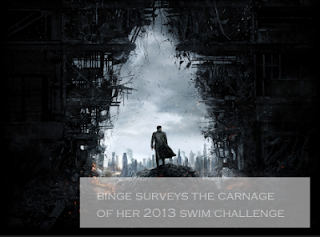