The Twilight Zone, February Fitness Challenge Hanging by a Thread and TGIF 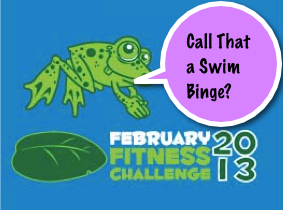 If things were bad yesterday they became simply surreal today. It was obviously my week to deal with the more vulnerable members of society.

My day had started with a 4 page faxed letter of instructions to represent a persecuted individual in the local magistrates court.

The day ended with my puzzling over how do you explain the consequences of court proceedings and a 46 page psychiatrist's report to the subject of the report who doesn't have the capacity to give you instructions and isn't fit to plead?

I gave up in the end and tried to explain what would happen at next weeks court hearing, (not very easy when the Crown Prosecution Service haven't yet had the opportunity of telling me what they want to do about it either.) Anyway we ended up talking about Computer games and Grand Theft Auto and I was advised that the Orange Car was best, the most sensible thing anyone had said to me all day.

Trying to fit any meaningful water time into my day proved to be impossible and I was resigned to a very short swim en route to the local hospital to see my last client. This fleeting dip at least meant that the challenge of swimming every day in February is still alive. I was so pleased when 5pm rolled around