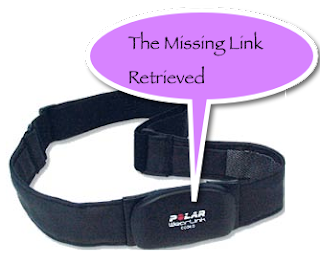 A bit of a disaster on the swimming front today as my evening session clashed with a meeting, I dashed back from Durham and made it to the pool in time to catch 12 x 100's.

I might have managed about 2k but I made the mistake of enquiring with the reception if they happened to have a chest strap handed in to their lost and found. Ah success; but the bureaucracy involved!!!

Which included finding the form relating to the chest strap in the "valuable items folder" but not before first going through a gazillion forms each one detailing a lost pair of goggles (you wouldn't believe how many pairs of goggles were handed in at Blaydon last week); before ultimately locating the strap (locked in the safe) and finally having the item returned to me, all nibbled into my swimming time.

The result: although I was able to reunite Toosmartwatch with the missing link and start recording my swims again, I was really really late for the swim. Rather than disturb my normal lane, I dropped in with the guys and hung on to Matt the Cash's feet.