Interesting day today as the swimming started for me. Now, although I was in the first session there were an unfeasibly large number of heats of the 400 free to bash through so I reckoned it would be lunchtime before I swam.

My dilemma was whether to get out of bed to make the 8am warm up or to employ the  Binge advanced racing tactics as explained here.

It seemed to me that two factors were in play, firstly a warm up would enable me to add yardage to my swim log and hopefully end up with a green week, but more importantly I was just a bit concerned that car parking facilities at the pool were inadequate for the host of swimmers who were about to descend on it and rather out of character for Binge I chose the early start. 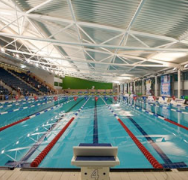 The great thing about nationals is that unlike most Masters meets the 50 m races are seeded, so all of your competition (in theory) is in your heat. I was therefore involved in a head to head with Spencer's star breaststroker Amanda Heath.

Actually I thought it was a three way shoot out with former world champion Pat Reilly, who won the encounter until I discovered that I'd moved out of her age group because I aged up this year.

Not too shabby with a 40.75 which is slightly slower than last year's European time so there's room for improvement in time for Montreal. The 200m wasn't quite as enjoyable (about 150 metres too far).

The evening found me heading into Swansea for dinner, I was with birthday boy Andrew Gristwood who was celebrating his 50th and had chosen as his companions for the evening a rather select band of women. By now I was beginning to navigate around Swansea and was even able to chuckle at the most inappropriately named "Salubrious Place" which appeared to be home to the local Premier Inn (go figure!)

Our restaurant of choice was Pizza Express who were desperate to get away for the footie and confused us all by bringing our starters and pizza out at the same time!