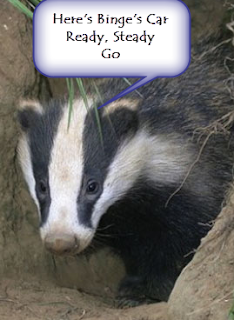 Bit of a technical malfunction this morning but normal service (normal?) is now resumed. Or at least it will be once I work out how to change the existing post for this one.

I'm recovering from dicing with death on the run from Teenage Triathlete's session at Wentworth last night, on the back road to Whittonstall the suicidal pheasants had taken the night off, only to be replaced by a suicidal badger who had obviously been taking lessons from them.

There would certainly have been a bit of a dint in my car if the brakes weren't working.

I'm not even going to mention the Rugby result, except to comment that as a Newcastle United fan I am well used to sporting tragedy and pretty desensitised to failure.

So this morning's session...no Fairy Snow Baby (looking after the Fairy Snow Babies) or Matt the Cash, so it was left to me and I naturally chose a pull with paddles set. This went down well with Synchro Dad, I'm not quite so sure about New Guy or Awesome Emma, I moved over and tried to hang off Synchro Dad's feet it didn't work and it became a struggle to ensure that I wasn't lapped by him. The first 4 were comfortably under 6 mins but the last two drifted off to around 6.

* slight over statement here cos the first one was off 6.45 as Synchro Dad needed to sort his paddles out.