Wednesday is the Pits 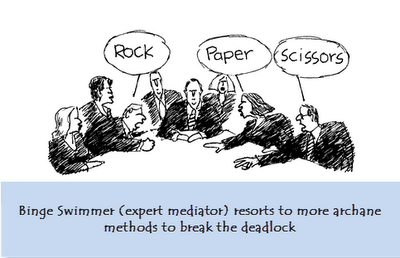 Swimming this morning was a whole 10p cheaper than yesterday, something I couldn't quite fathom until I walked onto the pool side to discover the British Men's Water Polo team training in the 50m pool.

So Binge Swimmer and Joe Public were relegated to the more familiar 25m laps in the diving pit. It was actually better in a way because the lanes were probably 3 metres wide and gave plenty of room to pass or be passed.

Now call me overconfident but I immediately chose the fast lane and set off on my session. This may sound as if I had given my sesh some thought and that I had a plan but actually I just made it up as I went along and I was feeling pretty good so I stuck it out for almost an hour covering 3K.

Over time the swimmers in the lane thinned out and eventually there were only 4 of us left, ploughing our lonely furrows. My companions included "Female stick insect", who turned out to be super fast and who was whopping me going up and down, I very quickly gave up trying to hang on to her feet, (although I was a little encouraged that I was out turning her (or so I thought)) and then there was also "garlic breath girl" and "halitosis him" I soon realised it wasn't good to hang off the wall when they stopped and I couldn't work out if they were an item because they weren't working together, although they disappeared at about the same time and clearly had eaten the same thing for dinner last night.


So onto today's session: well on the mediation course we're really getting into much more complicated stuff now! don't let that first comment mislead you cos it's not. (although I suppose it might be if you have the brain capacity of a Vulcan but for a poor Binge Swimmer.......this is not simple stuff)

But back in the pool things were much more straightforward

* or thereabouts as I ducked and dived around Halitosis Him and Stick Insect
** these weren't intended to be but ended up as progressive.
Posted by Binge Swimmer at 18:34