The Streets of Manchester are paved with 20 quid notes......(mine!) 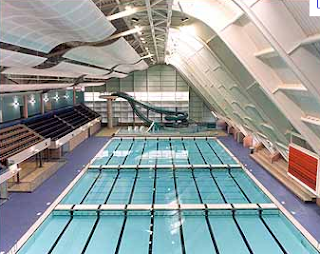 Hi Guys and greetings from sunny Manchester, the final part of the bank holiday weekend was spent by me flogging down the motorway for the first part of a mediation course starting first thing Tuesday morning. I had that dilemma whether or not to spend all of the bank holiday at home and  have an unfeasibly early morning start which would mean trying to drive into Manchester during rush hour, or curtail the break and stay over.

The thought of Manchester rush hour traffic was the clincher so I checked into my (very nice) hotel apartment around 10.30pm on Monday evening. In a rare burst of forward thinking, I had deliberately selected accommodation midway between the Manchester Aquatic Centre and the hotel in which my course was being held, with the intention of having an early-morning swim to start the day.

With an unaccustomed burst of enthusiasm, I tumbled out of bed at 7:10 am on Tuesday, and decided that rather than take my wallet to the pool, I would just take enough cash to pay my entrance fee and buy breakfast on the way back. Stuffing a £20 note into my back pocket, I set off for the pool. On arrival, to my horror, I realised that the banknote had worked its way out of my back pocket and I was without the ability to pay for my swim. I retraced my steps assiduously scanning the pavement and roadways for the missing banknote without success.

Great start to the day, my planned hour swim was eventually reduced to 25 min and produced an uninspiring but nifty 1500m. I was actually quite relieved about this as swimming 50m is a bit of a shock to the system  first thing.

Still no download of "toosmartwatch"
Posted by Binge Swimmer at 18:45