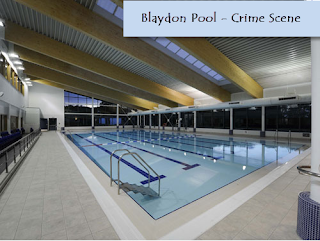 In a rare showing of family unity both Bob and teenage daughter decided that they would come training with me this evening. I was quite taken aback by teenage daughter's enthusiasm to attend as she hasn't swum since she quit last October.

I stuck her in with the fast guys where she struggled along at the back of Jetpoodotcom and Synchro dad; that is until she and I were swimming in adjacent lanes and I managed to breaststroke kick her quite hard in the fingers (now whilst in the depths of my all too frequent frustrations with her I may fantasise about physically kicking her, you will appreciate that it was a complete accident).

It did however provide her with the perfect excuse to leave the pool and make her entry in the pool accident book (and forced me to dodge the social workers who descended on the pool to investigate the allegations of child cruelty.) She did however enjoy spending the rest of the session sitting on the poolside chatting to the C squad coach.

Congratulations and respect to the most eccentric member of our masters squad, "Finswimmer John" who was celebrating a two and a half second PB for some apneatic achievement involving a large plastic fin and a pool in Belgium. I don't pretend to understand this sport but I do recognise the satisfaction of a PB particularly by such a large margin.

It was left to me to come up with this evening's session, as the Fairy Snow Baby was sciving in Oxford. I was a bit out of touch having spent the last 6 -7 weeks minimising my swimming. (or living up to the title of this blog) I settled on a bit of variety and speed which included my favourite set ever which is the 125's 50 pull, 25 kick and 50 swim, it's swum at full pelt with the following thought processes.