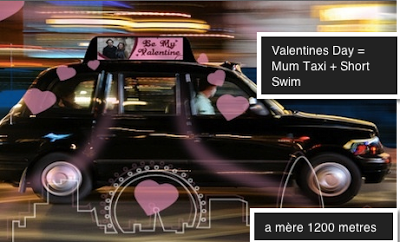 You might've guessed by now that I'm in the process of catching up with this blog having suffered a fairly horrendous week at work.

Thursday's swim turned out to be interesting only so far as I was running late and at 7:28pm I was left with the choice of where to go for my daily dip.

The dilemma was complicated by the fact that I had been asked to collect Teenage Triathlete from Newcastle where she and current boyfriend (Teenage Rugby Player) were going for a romantic Valentines Day dinner (Wagamama go figure?)

The estimated time they were to be picked up was around 9pm so I had a choice, do I go down to Gateshead and miss the first half of the session because I was late (now there's a surprise) or go to the adult session at Consett for 30 mins. Well the latter venue won out and I arrived surprisingly early and walked onto the pool side to find an aquarobics session in full flow.

No one had mentioned to me that I wasn't allowed onto the pool side until 8pm! I sat down on the edge of the pool and dangled my legs in the water, making a mental note that I needed to shave them, when horror of horrors the instructor who had been taking the session from the side walked to the bottom of the pool and stood behind me to finish off the session. (An introduction to the woggle!)

About 25 pairs of eyes all seemed to turn and focus on me as the class turned to face me as they followed the instructor. I felt as if I was voyeur. It was an excruciatingly uncomfortable 5 mins as I imagined each one of the participants noticing my hairy legs! They did eventually finish enabling me to plough through 1200 metres before getting out.

Perfect timing; out of the shower and I receive a call from TT to come and rescue her, as they'd finished their meal and were freezing to death in the Central Station. Well they'd have to wait in the cold for 25 minutes. (Perhaps there is a God?)