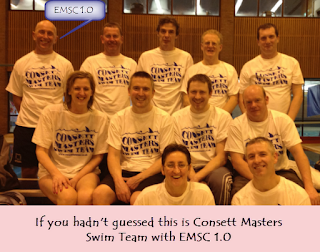 It all started so well with a 2.35 for a 200 free, not great but a couple of seconds faster than last year, and ended ok with a slightly faster 100 IM, (although I had to work really really hard on the breaststroke leg to catch up to Marie Helene,) but we'll forget about the bits in the middle.

Had a great day out at Darlington with the Consett Crew (see photo,) if we all look a bit odd that's because our T-shirts are on back to front just to make sure you know where we're from.

Couldn't quite work up the enthusiasm for swim downs or even to warm up for the afternoon session, also I wasn't really paying attention to my times, too old and blind to see the electronic scoreboard after the swims and they haven't published them on the web yet. It was great having EMSC 1.0 on the pool side to tell you when you were swimming, like being a kid again....

Posted by Binge Swimmer at 20:31 No comments: 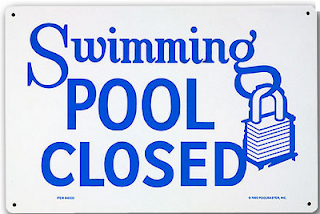 A bit of a different Saturday morning, as believing (erroneously) that Dunston Pool was closed for a kid's swim meet, I made my way to Consett for their early morning session.

To be met by Evil Mutant Swim Coach 1.0 who had an evil, mutated swim session in preparation for the Darlington Dolphins Swim Meet on Sunday.

Doesn't it hurt to swim fast, especially when you're not used to swimming fast but just plodding along at a comfortable pace.

The only good thing about the set was it only lasted 25 minutes or so......

Had another of those completely mad weeks at work, which included a Benefit Tribunal (nasty establishment trying to make a bloke who could hardly, walk, or even breathe sign on as unemployed):

and yet another grave and weighty criminal assault trial, featuring a Consett staple:- paralytic mother and daughter fighting. This was a sort of down market version of Geordie Shore (can you get any more down market then Geordie Shore? I hear you ask). Absolutely

You know the everyday situation where your kitten dies, and you are so overwhelmed by grief that you have to drink about a gallon of vodka, call your daughter for support at 1.30am, drink about another gallon of vodka with her and then at 2am knock up a neighbour, go around to his and consume probably another gallon of the Russian tipple, fall on the floor and are so drunk that the neighbour cannot move you and calls 999.

Somewhere along the line one of them says the wrong thing and it all kicks off in a thoroughly unedifying spectacle. Despite the fact that mother was unconscious and entirely incapable when the police arrive to assist the beleaguered neighbour and she then goes on to tell two entirely different versions of the incident to the police and the emergency telephone operator when she reports the incident almost 18 hours later; and a further three versions whilst in the witness box, one under examination in chief, one whilst she's clarifying the case for the Judge (sour faced) Harrison and finally a completely different version under my cross.

I escape with a victory before lunch and time for a quick dip the first of the week. I've lost the will to live by this point so escape after a mere 30 lengths.

Posted by Binge Swimmer at 19:47 No comments: 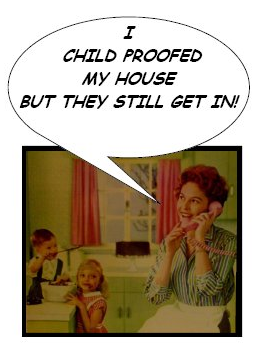 So despite it being Mother's day I still made it to the Sunday Session at Consett, which is more than can be said for the rest of the crew. Only Keith and I turned out for a rather nippy little set which meant we had a lane each (no one to draft off).

As I set off as a "Billy no mates" I consoled myself with the thought that I obviously swam with a bunch of thoughtful, considerate "new age" men who clearly chose to pamper their other half to ensure they had a restful and enjoyable Mother's day, and were prepared to selflessly sacrifice their own swim time.

Hmmm doesn't square with my impressions of Clarkie, Sparkie, Cloughie and the rest..... (I'm sure they are all keen to sacrifice their swim time but somehow I'm not sure that the pampering of their better halves is ever the reason!)

EMSC 1.0 even added the 33's at the end without writing them on the white board just to prolong the agony. (how sneaky is that)

Posted by Binge Swimmer at 19:12 No comments:

What a week this has been, completely frenetic, and included contriving to lock myself in a set of Barrister's Chambers.

I walked out of the meeting with a colleague; through the internal security door to the main door to discover it was locked and the security door behind us had locked as well. What a pair of plonkers, after a few minutes we realised no one was coming so we started to bang on the doors and were eventually rescued by Toby Hedworth QC who thought it was all very amusing.

Maybe being locked up is good practice, as I was flashed in a speed trap in Sunderland, and am fearful of the consequences as I've been here before, and I feel a totter coming on.

No Evil Mutant Swim Coach 3.0 at training this morning, but he's sent his spies as son of EMSC was life guarding. So we did the 600 kick set and dedicated it to absent fiends! (sic)

There was an audible groan as Evil Mutant Swim Coach 1.0 turned round the white board to reveal this little set and a number of comments about feeling a blog coming on.

Deja Vu, the fast 100's were a real struggle, no smooth easy speed here just a bit of disjointed thrash and dash.

The only good thing about this week has been, I managed to swim twice, otherwise I missed my weekly yardage goal by 4000 metres.

Need to get back in the habit.

Posted by Binge Swimmer at 16:18 No comments:

A morning at the Mature Swimmer's ITC

I pinched today's picture and caption from Evil Mutant Swim Coach 3.0's Facebook. Demonstrating he does have a sense of humour (despite all the kick he made us swim)

This was my first swim of the week having dodged a couple of sessions in favour of watching the Olympic trials on the red button. Pretty inspiring stuff.

I survived this morning reasonably well, I was helped by having been given the opportunity to comment on the session yesterday (to tell him what I want! what I really really want).

Posted by Binge Swimmer at 21:55 No comments:

The lunchtime kick off in the Tyne Wear local football derby took a heavy toll on the turn out at Consett Masters' session this afternoon. As a significant number of fellow sufferers opted for the match.

Meanwhile back in the pool the comments about the coach were almost as venomous as the atmosphere on the pitch at St James' (can't bring myself to call it by that other name) and I was still swimming rubbish.

Although I did get some encouragement from Clarkie who kindly thought I was due a  couple of bad sessions cos I had been flying earlier in the week. What goes around comes around? 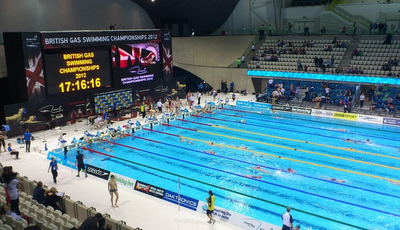 Even the prospect of watching the British Swimming Championships live on the red button couldn't stir up any enthusiasm for the session this morning.

But wasn't it great to see a couple of local girls storming the 400 IM at the trials (even if they were trailing after Smiley Miley).

Bit of a different session for us this morning shortish stuff with a bit of extra rest and some form stuff (not that the extra rest helped) I was doomed to swim pants. I was saved from the 50's from a dive with a nasty pull in my calf/hamstring/leg. Which gave me an excuse to be a wuss.