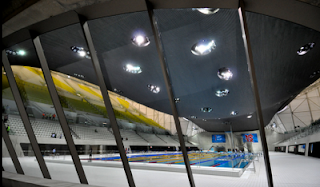 Finally found out what Olympic tickets I had been allocated in the ASANER ticket ballot, and in 366 nights time I'll by sitting watching the event of the games; the men's 200 freestyle final.

I know how Charlie Bucket must've felt when he peeled back the chocolate wrapper and found his Golden Ticket.

Simply can't wait; I'm hoping for another Phelps v Lochte showdown with the prospect of my lunch mate (see here). making his comeback and jumping into the mix. Thrilling or what.

So encouraged by the Olympic furore this week we covered a pretty tidy 4,500 m. You can easily see my bit of the session, (pull with paddles), the rest of the guys turned up late and I had covered most of the warm up in splendid isolation before I got some company. The horrible medley's (too many and too long) were courtesy of the Fairy Snow Baby.

It's been a few weeks since I've made a Tuesday night session so I'm feeling quite smug having managed to survive the full two hours which brought me a further 5,500 metres closer to achieving my goal.

Another collaborative session, with Matt the Cash chipping in when I ran out of inspiration. I have to take credit for the monster set of 100's which caused a great deal of consternation in our lane as we completely lost count and couldn't work out where we were, (nothing new there then.)

I was congratulating myself for completing the 16 x 25's fly which were extremely slow and very ugly, and my own rather pathetic tribute to our own Madame Butterfly Julie Bradshaw who appeared on Breakfast TV this morning it's here if you missed it.

* this bit was almost a continuous swim and if I'm honest we lost the plot on the repeat time in the middle.
** not very pretty or sharp but completed without any drill.
Posted by Binge Swimmer at 23:02 No comments:

Well if you thought that the Death Eater photo from last Saturday's blog was particularly attractive; my other half turned up for swimming in the most fetching footwear ever.

I hadn't noticed them as I fell out of bed at 7.32am and into the car a mere 90 seconds later; but as I stood waiting to go in and he walked towards us I couldn't help but laugh, (guffaw actually).

Bob's obviously trying to edge out the British Gas Flip Flop. as the footwear to be seen in this summer. Whilst this may raise questions about my family's sense of fashion, you know pudding basin haircut, weird shoes etc, the excuse for wearing them (he studiously avoided answering my question as to how much they cost!) was that he had bought them for a student project! (but Bob you're 51 years old and you haven't been a student for quarter of a century!) and they help him run properly as they mimic running barefoot improving his gait.

Mickey take over we settled down to a fairly hard session.  The 8 x 50's drill were meant to be progressive in time and stroke rate and swum as follows No 1 catch up with 4 kicks before you start the arm pull, No 2  regular catch up (pull as other arm enters water) No 3 cheater's catch up start pull when other arm is half way through it's pull phase (Daddy Beckleberry confessed that he always swam catch up like this hence the name) and finally no 4 full stroke.

* this should've been 16 but we ended up in a dispute as to how many we'd done "de ja vu"
** I've explained this before the mind set is 50 pull go hard, your legs have rested so hard 25, your arms have had a bit of a breather so really hard final 50 swim. It is one of my favourite sets.
Posted by Binge Swimmer at 16:32 No comments:

Too Scary to be a Death Eater or Journalistic Integrity undermined by Pudding Basin Haircut?

So the editor of the Swimming Times suggests to me that for a few months I might like to contribute to the "Inside Out" feature in his esteemed publication which I affectionately refer to as "the comic."
Now some of you may be aware that I am already responsible for the Masters column in the trade mag, and its not like I have a significant amount of spare time to devote to this endeavour;
But, flattery will get you anywhere and with the thought that my journalistic talent was about to be recognised and assurances that firstly, I could use some of the material from this blog and secondly that the sub editor Mr Guttridge would not "Gut" my attempts at humour from the column, I somewhat foolishly agreed.
I should have been suspicious during a telephone call last week when the Editor mentioned he had some good action shots to illustrate the piece, the result  hmmm well see above.
So first session post publication of my first effort and I walk into training this afternoon to be met with hoots of derision and a tsunami of mickey taking. As you can see from this shot I am broad shouldered (comes with the territory of being a swimmer) and well able to withstand the sustained personal attacks upon me and my choice of hairdresser so it ultimately did not put me off my session.

PS Just in case there's any lingering doubts that's me in action in Leeds last month!
Posted by Binge Swimmer at 17:02 No comments: 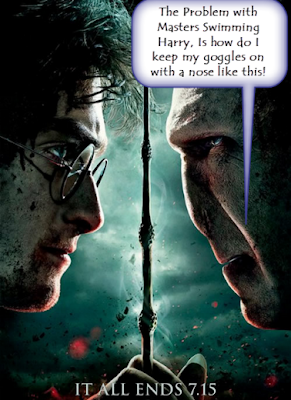 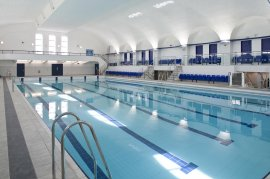 Finally I managed to stop the rot and after a somewhat frantic and completely swim free 11 days I managed to hit the session at Gateshead Leisure Centre tonight.

The reasons for the lack of aquatic endeavour range from, a cancelled session, to an ASA masters committee meeting, and simple slothfullness.

There was only 5 of us turned up and the Fairy Snow Baby was in a mean mood as he set this little tester set. I rather stupidly decided that I would try and hang on to the guys pace they were swimming the repeats on 50 seconds per 50. The most rest I had was about 12 seconds and it just deteriorated throughout the set. The last 3 repeats were pretty much a straight swim as my heart rate shows.

The 4 x 50's kick were meant to be 12.5m underwater and 12.5 kick, SynchroDad, and Matt the Cash and me swam the underwater bit and then drilled the rest of the repeat, much to FSB's annoyance cos he then made us all do it again because it was meant to be kick!!! I felt like a 10 year old, he'll have us standing in the corner next time we lash up!

So there I was nicely on track to beat my monthly target for June.. and it all went horribly wrong.

My swim free week started last Sunday, when I turned up for a swim at Consett to discover they'd all gone for a BBQ and forgotten to tell me! (fuelling my creeping paranoia).

Monday should have been the increasingly regular "Flog in the Tyne" but a conspiracy between a late finishing conference (God can't barristers rabbit on?) and trying to produce and surrender my driving licence to the local nick (much to the local constabulary's amusement I can say) put paid to that. Tuesday I ended up baby sitting teenage daughter, and Saturday the pool was in use for a swim meet.

My sole swim for this week then (breaking my secondary goal of 2 swims per week for the second time this year) was at Consett this afternoon. Wasn't it a glorious day I nearly dipped out to spend the afternoon in the garden but subjected myself to the set below.

* I think I missed 2 lengths out here so
my swim down was actually 266m!
Posted by Binge Swimmer at 19:22 No comments: