Binge dines with the Thorpedo

﻿
I've just returned from a trip to Manchester to take part in the first Great Swim of the Season "The Great Salford Swim". What a great event, I can't say that I am an expert open water swimmer but it was really well organised  and despite the ffffff freezing fourteen degrees and the miserable weather it was really enjoyable (once I got passed the first 150 metres).

I was ably assisted by teenage daughter whose day was made by our running into Matt Baker and Ian Thorpe in Costa who kindly cooperated with our requests for autographs and photos. I'm not sure what they had done to be sentenced to such a bleak afternoon at Salford Quays.

They were both lovely and Matt Baker is such a gent even signing the back of my coffee receipt for my mum who is his biggest fan. Needless to say the following image was uploaded onto teenage daughter's Facebook page before you could say "Social Network". 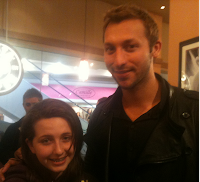 OK I suppose it's a bit of artistic license to say we dined with them when we were sitting two tables away but it made for a more interesting headline.

I also learned that I could not be a paparazzi because it took us about 30 minutes to pluck up the courage to ask for a photo and autograph and about 4 goes for me to work the camera on my phone as I was so in awe of the Thorpedo I kept pressing the wrong buttons.

As for the swimming; well I managed a sub 27 mins which put me in the top 150 finishers and 2nd woman in my age group. Romford's Kay Hamilton swam a blinder with a 22.06 for 23rd overall and 5th woman.

I took "toosmartwatch with me" for the trip and wore the chest strap. So I have a print out for the race see below.

The beginning was awful, cold, horrible, swimming over people, a fair bit of head up breaststroke and a touch of blind panic, why is swimming in a wetsuit so constricting? (that was a rhetorical question but I know you're all thinking cos you're a fat b***ard).  ﻿﻿﻿﻿﻿﻿﻿﻿
﻿﻿﻿﻿﻿﻿﻿﻿
﻿﻿﻿﻿﻿﻿﻿﻿ ﻿﻿﻿﻿﻿﻿﻿﻿The route around the quays is interesting and the swim through the Mariner's Canal into the adjoining quay meant that the spectators could get really close to the swimmers.

After about 200 metres or so I eventually settled down and the only problem I had in the closing stages was that my fingers were so cold I couldn't close them, and was giving a vulcan greeting see photo  to the spectators on the bank side. Mind you I think the Vulcan death grip would have been of more use at the beginning.

So all in all the event lived up to it's billing, a Great Swim in Salford. You should all try one. Bring on the Great North Swim next month. As an afterthought I'm playing about with inserting video's here's the best one

I'm the swimmer with the pale blue underarms who goes spectacularly off course.
Posted by Binge Swimmer at 20:58