In which Binge Hangs Over and Matt the Cash Cocks up 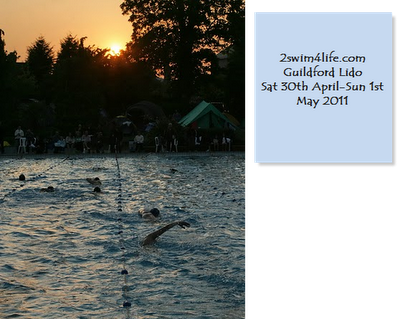 I was feeling pretty inadequate this week having failed to make the pool since my last outing in Manchester. As usual I was full of good intentions to attend last Saturday morning's session but I ended up at a silver wedding anniversary party. (I know there's an element of "deja vu" about this post).

We dropped teenage daughter off at my parents and confirmed we'd collect her between 11pm and 11.30pm, you can imagine the wrath of my parents (I was and probably still am truly in the doghouse) when we didn't collect her till 2.45am. I was significantly the worse for wear and didn't wake up until 10.45 with a monster hangover.

Of course feeling inadequate is not an unusual state for me to be in, but this particular bout of inadequacy stemmed from spending last weekend following the exploits of a number of  "swimclubbers" who undertook the ultimate swimming challenge "2swim4life" at Guildford Lido . This involved swimming one mile each hour for 24 hours or there's always "2swim4life lite" which is a mere 12 miles. As if that wasn't enough the pool temperature was a brisk! 20 degrees. 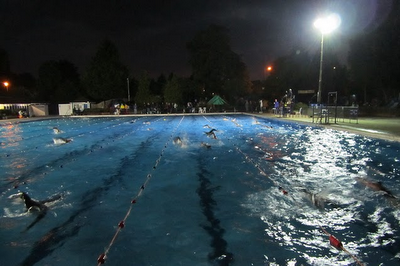 Complete and total respect to everyone who took part in this event I think it rather puts my February Fitness Challenge exploits into the shade.

The above link on the Swimclub.co.uk website provides some interesting commentary on the challenge and was clearly a life affirming and inspirational event for swimmers and helpers alike.

Thanks to Ruth Cordero who took and published a fantastic series of pictures of the event.

Back to the more mundane matter of a Gateshead and Whickham Saturday Morning Session, firstly we had a record turn out with 10 swimmers battling the ravages of Friday night hangovers and the magnetic pull of the duvet to sample the Fairy Snow Baby's "it sounded worse than it was" session.

I wasn't particularly enthusiastic about the swim, but I was up and Bob was going so I piled into the car. We normally share the pool with the kid's squad so I dropped into our middle lane, with "Awesome Emma" and "The New Guy" (I can't remember his name and come to think of it he's not that new!).

Fairy Snow Baby and Synchro Dad snagged an extra lane when only 3 kids showed up, leaving me with a dilemma; do I stay in my lane and swim the 200's pull on a rather pedestrian 3.40 or try and stay with Bart the Shark and Matt the Cash and a repeat time of 3.15.

Yeah guess what I opted for....why do I do this? actually I managed them pretty comfortably on around 2.54-2.56 drafting off Matt the Cash. Matt valiantly led the lane out for the second set of 200's and completely bollocksed it up taking the 10seconds rest immediately after the first 50 much to the surprise of Bart and myself.

Bart was furious when he stopped a second time at 150. We both decided to write off the last 50 and saved our energy to castigate Matt the Cash when he finished somewhat sheepishly conceding that he had completely F**ked Up.