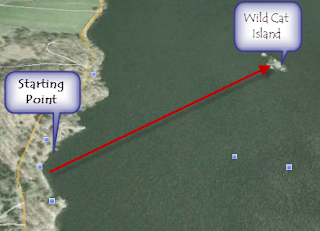 If yesterday's swim drew upon imagery from Harry Potter then I'm really giving my age away here as today's swim in Ullswater had me imagining I was Captain Nancy Blackett and I was striking out for a raid on the Swallow's home base.

Now before you saddos start pointing out to me that Ransome's Wild Cat Island was probably based on Peel Island on Coniston, I know all of that but allow me some artistic licence here cos I just loved those books.

Ullswater felt a good couple of degrees colder then Coniston (or Windermere) and there was no Devil's Snare around to give me the heebie geebies. I swam out from the beach to the nearby island navigating past a couple of small motor boats and the obligatory canoe.

I clambered out on the island to wave back at Bob and teenage triathlete (who totally wimped out) before making the return swim. I did get some strange looks from the other holidaymakers on the island who had arrived there by more conventional (and drier means).

I was in the water for around 25 mins and probably covered around 1000m all told; for the first time since Saturday we had some patchy sunshine, ( not that you can tell from the pictures).  Despite the chilly water I think this was my favourite lake the fells here are much steeper and seem to come right down to the water making it sort of quite intimate which sounds ridiculous when you consider the vast scale of the lake and mountains compared to the usual indoor places where I swim.