2014 The return of Binge and another resolution to be broken. Not sure whether it's registered in the consciousness of my readership yet (all 3 of you), but there has been a distinct lack of Bingeing in swimming pools and blogging as 2013 drew to a close.

But there's something about the human condition that when January rolls around we resolve to make a fresh start and to immediately break all of the bad habits which have been ingrained into our psyche for decades?

You could call it a triumph of hope over experience but this year was no exception as I resolved (yet again) that I was going to take swimming seriously, get fit and for the third time of asking complete my mile a day challenge.

My starting point for this year’s campaign was to download a copy of Trondi’s spreadsheet (which can be obtained from the swimclub.co.uk site) so that I can track my progress over the year. I enter 590,000 metres as my target distance and the programme starts to shake, convulse and snigger and then reports to me that this is not a sensible target. I realise I needed to rediscover the swimming habit and pretty quickly.

So returning to work after the holidays  and during my first lunch break I tear myself away from the post Christmas divorce rush, for my first swim of the year. I had anticipated that as it was still the school holidays the pool would be busy, but not in the least, clearly the kids were still wrapped up with their Christmas presents or put off by the weather. The pool was surprisingly tranquil with about 6 others most of whom were head up breaststrokers. 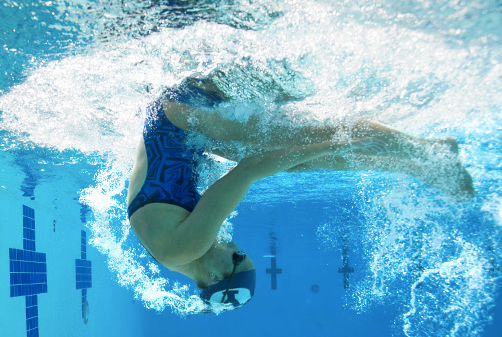 I chose the empty lap lane but was soon joined by a bloke who insisted in swimming next to me rather than in a chain. This guy had a good stroke, a fair turn of speed, tumbled and was easily out pacing me. I did try and hang on to his feet for a while, I just couldn’t help myself, particularly when he said in a rather patronising tone that he was “impressed” that I was tumble turning! but despite this additional motivation I was quickly left floundering and overwhelmed by the effort.