Girls on Tour: The Trip to Trieste Day 3 July 6th 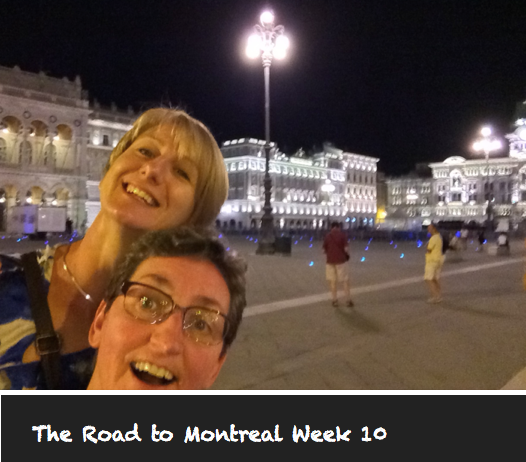 Our trip sadly came to an end but not without a great night out, starting with kir royal's and then  dinner in the company of our new found friends.

We left them watching the Dutch v Costa Rica, and set off on a shopping expedition. It was festival time and the shops were open till midnight.

It's great wandering around continental cities late at night, the cafe culture, the crowds, there were dance competitions going on and we spent a very pleasant couple of hours refining the art of the selfie.

Determining to squeeze the last amount of value out of our trip, after a leisurely breakfast (including cake) we had to sneak out for a last swim in the women only beach.

We thought we'd get there early (9:30) only to discover the world and his wife (or rather just all of the wives) were out on the beach. We found a spot to drop our towels about four metres from the water's edge and hobbled painfully across the pebbles into the sea (much to the local's amusement they were all suitably attired in Jelly sandals).

We were also seriously overdressed in our speedos as most of the others were wearing bikini bottoms only. We did however cover another 1000 metres of head up breaststroke.
Not really sure that this will assist in the Montreal preparation but it was a very civilised.

The trip back for our flight was interesting, (in an adrenalin rush sort of way ) we thought 40 minutes for the ride to the airport, absolutely wrong!

The Taxi arrived about 15 minutes late to start with and the road out of Trieste to the motorway was nose to tail traffic. I was trying to suppress a growing feeling of anxiety and unease which was only slightly allieviated by the taxi driver playing opera at full blast. He spoke no English but obviously realised the urgency and where he could put pedal to the metal depositing us at the airport at 12:28pm the flight left at 13:00. We cleared security and made it to the gate by the skin of our teeth.