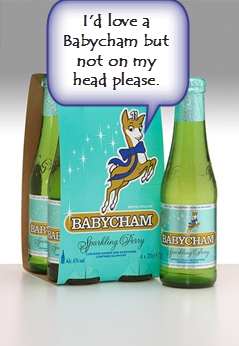 Well the box of frogs saga see this post and this one finally reached it's climax this afternoon in Peterlee Magistrates Court, when my girl who has spent the last 6 weeks luxuriating at her majesty's pleasure got the chance to test the prosecution evidence. I was expecting the witness (her husband) not to turn up but he did and so to battle.

My girl faced a common assault charge, the allegation being that she had thrown a Babycham bottle at her husband which had hit him on the head. (and yes "I'd love a Babycham", or am I giving my age away here).

Now whilst she freely admitted, recklessly throwing a Babycham bottle in her lounge (as you do) she denied that the bottle had ever come into contact with his head or that she was intending to throw it at him.

There were some lovely moments in the evidence notably when the husband confirmed he'd suffered a glancing blow from the offending object and was asked by the prosecutor how that felt. He paused for thought and then uttered "well it's like being hit in the head with a babycham bottle".

Having elicited the relative positions of the protagonists when the bottle was thrown, it appeared that my girl was sitting on the sofa and hubby was sitting on the floor approximately 3 to 4 feet to her right, mysteriously he asserted that he had been hit on the right side of his head (actually he gave three different locations for the assault).

This evidence allowed me to make a closing submission that the court was no doubt familiar with the Magic Bullet theory from the Kennedy assassination, well it appeared we had the Consett equivalent "the Magic Bottle" theory which flew from my clients hand swerved around the back of his head clobbered him on the right side and then carried on forward ultimately coming to rest between the television and the christmas tree.

Clearly persuasive as she was acquitted and free to go, it was quite touching really as hubby waited till she was released and they then travelled home together in a taxi paid for by victim support! A happy ending? but she still served 6 weeks in prison for an offence which even if she had been convicted would never have merited clink....

On to more mundane things Consett session this evening,