It's Sunday and something's missing (WOT NO 100's) 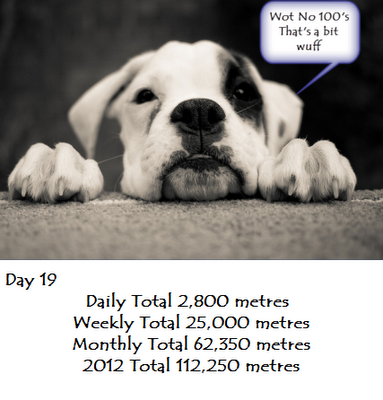 Blimey a Sunday and no hundreds!!!! what is going  on here.

With all of this swimming am I now completely chlorine logged and hallucinating? or am I dreaming? better yet has Evil Mutant Swim Coach 1.0 lost his marbles? or finally found his grey matter?

Not that the ensuing session was any easier, "this is all about back end speed" EMSC 1.0 explained. I initially had to chuckle at the thought of amphetamine suppositories (I've obviously been watching too many re runs of The Wire).

I soon realised I was on the wrong track and he was talking speed endurance (more chemically mind altering imagery there as well.)

Back to reality; as you've probably guessed the aim of the main set was to swim the 4 length repeats at a constant time and then push the pace a bit on the 2 lengths.

I felt pretty jaded but after a couple of 2.04's for the 133's I settled down into a steady if not spectacular 2 mins, and took the 66's down to 54's then threw in a couple of 53,s and 52's towards the end (and yes it hurt). Queenie Reid and I were discussing how hard this was and winging about our various ailments in the showers after. Our conclusion; probably we're too old for this!