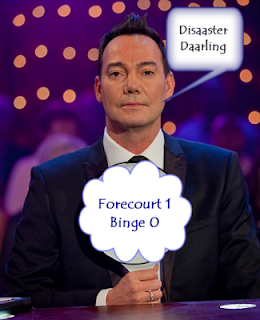 Now how's this for karma, if Binge was undergoing the Foster effect in training on Wednesday night, with her average of sub 30's for 33metre lengths, it was quite clear that Mark Foster received a huge dose of the Binge affect as he scored an astounding perfect score of 30 for his first dance on the third night of the Strictly Tour in Newcastle.

Significantly better than I'd imagined he was going to be. I was there with teenage triathlete, treating both grandmas and grandad Jim to a late Christmas present. I know I've mentioned that I have a propensity to be a sad individual so I'm cool with admitting I thoroughly enjoyed my evening...

That is until driving my mother in law home I stopped for petrol at a garage on the Felling bypass, I'd put about 40 quids of unleaded in the tank when the sickening realisation dawned upon me I was in Bob's car and it's a diesel! Oops I'll not elaborate on the following events but I eventually got home around 12.30am and Bob (in full cavalry role) arrived with the car (being towed) about 2 and a half hours later!

Realising I was going to miss swimming I had fortunately found time for Thursday's workout at lunchtime,