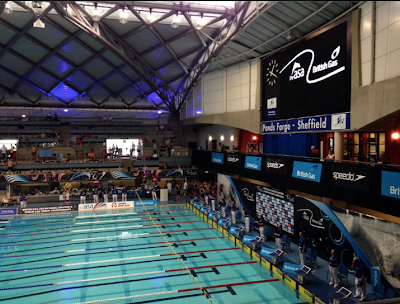 Having to work around a two day hearing scheduled for Thursday and Friday my national's programme was thrown into disarray.

As I was filling in my entries I was quite pleased to note that there was no chance of making Sheffield for the 1500 or the 200 breast, but traffic willing I might just be able to arrive in time for the 100 IM.

Sadly that was not to be, A1M car park turned a 2 hour journey into a 4 hour journey. I arrived and rang Judo and Sumo to discover they had finished and were walking back to the hotel.

Ah well, at least I was in time for dinner, we caught up with the stars of Binge's adventures in Eindhoven at Ask and whiled away a beer or two and a bottle of wine or three before returning to the hotel. Now if I had been sporting my sensible head I would've gone straight to bed but....

Matt the Cash and I spent till the wee small hours of the morning contemplating the likely fate of Newcastle United this coming Sunday.

Three more beers and getting to bed after 1am is not a clever way to start a National's campaign.