The Flog on the Tyne is all mine all mine (oh and 23 other blokes!)

This is not "the Great North Swim" was the opening line of the safety briefing given by Mr Tyne River Swim Tony Greener himself and boy was he right. In every way there is just no comparison between what we achieved on Saturday and the popular one mile paddle in Windermere.

I had watched the start of the 2nd Tyne swim (see here) and was a little carried away with the atmosphere, the glorious sunshine and sparkling river which inspired me to try it out this year.

I had a similar experience in Montreal at the World Masters Swimming Championships; when I was watching the open water event which took place in the rowing basin in fabulous sunshine and thought "that looks great must do that next time;" of course the next time was a very wet and miserable Saturday morning at Holme Pierrepoint.

Well history was about to repeat itself because after a conversation with Tony Greener (who does a fantastic job organising the event) I was in.

Hmmm it didn't bode well when bad weather meant we had to abort the original swim date at the beginning of September. The event was rescheduled five weeks later when of course the weather and water temperature would be less forgiving and was likely to invoke that Saturday morning in 1996.

Now, just to make sure I was properly prepared for this swim, as regular readers of this column are aware I have followed a dedicated regime of training (well ok I took part in one of their training swims two weeks ago  which was pretty challenging and details are available here, this just happens to be the last time I swam anywhere; obviously saving myself for the big day!)

The day started with my having to drive teenage triathlete to an open day at school and dashing back to collect my gear, chop Snickers bars and stuff them into ziploc bags to secret in my wetsuit, make isotonic drinks and very sweet drinking chocolate in a thermos; not to mention collect Bob who valiantly offered to provide support (carry my gear).

The pre swim briefing took place in Maersk Shipping offices on the Quayside, very swanky and with a ladies loo to rival Henley Rowing Club.

As I signed in Tony said "you're the only girl left doing this! " no pressure there then! Although at my age (rapidly approaching my mid 50's) I was quite chuffed to be described as a girl! Liability waivers signed, and briefing over we collected our coloured hats and walked down to the marina under the shadow of the Tyne bridge to be assigned our safety canoe.

I was in the first wave and was being chaperoned by a wizened and weather beaten canoeist called Stu, (who bore a striking resemblance to a clean shaven Captain Birdseye) and at times during the swim puffed on a pipe.

A fairly dodgy hooter sounded the start and we were off, nothing for it but to take a deep breath and jump in. (some of us with more style than others) The water was unsurprisingly cold, but unlike last month, we were assisted by a strong current (which we noticed standing on the pontoon as logs and other bits of the flotsam and jetsam of life streamed past)

We made great time under the Millennium Bridge and past the Baltic. I know I keep saying this but you do get a radically different perspective from the water and there are some great buildings on this stretch of the river.

The general scenery moved seamlessly from modern urban, to riverside park land, to deserted ship yards and industrial docks as we approached the commercial waterway at the mouth of the Tyne

In a strange sort of way I was thoroughly enjoying the swim; but after about four kilometres the river bends and flows northwards and at this point we hit our first patch of rough water with a headwind and a heavy swell.

This heavy going continued and on the approach to the DFDS Ferry at between kilometres 11 and 13 the river widens out and navigating through that stretch gave everyone a real battering. The waves were probably two or three feet high and we were being relentlessly pummelled and slammed by them.

I'm not sure that I can accurately or eloquently articulate what I was feeling at this stage, but it was hard to avoid the conclusion that I was locked in some David and Goliath type struggle as this pretty insignificant speck being tossed around and toyed with by the power of the river which seemed huge and absolutely overwhelming. 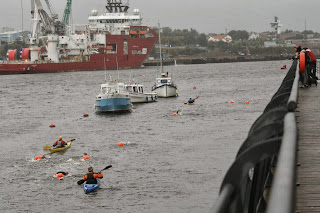 It was strangely exhilarating; as if you're battling with nature, and there's definitely something elemental about the whole thing. Fun's not quite the adjective I would use but the experience was so far away from the day to day sanitised and safe stuff of life that in a perverse sort of way I was still enjoying the swim.

No doubt the fact that unlike the training swim, the strong downstream current meant that we were still making decent progress contributed to the positive view I had at this time. Also crucially my pod mates (fellow white caps) Jonny Heron and Dave Lant were great company and we encouraged each other during the occasional gel stop, not to mention the fact that Bob popped up on the bank to shout encouragement, at the Tyne Tunnel site (just over 10 kilometres) he'd parked the car at South Shields and was running back along the riverside to meet us.

Captain Stu did a fantastic job supervising our mini pod (as did all the other canoeists) he was particularly good at finding little calm backwaters where he could pour cups of hot chocolate.

There's a bit of an art to treading water and trying to grip a plastic cup after 3 hours in 12 degree water. But (at the risk of sounding like an Enid Blyton novel) I can tell you steaming hot cocoa in these conditions is quite the most fantastic drink you've ever taken.

By the time we reached the South Shields ferry we were really on the last leg, most of the rest of the field had caught us by this point and there was quite a pack as we rounded the last bend.

We swam between the moored boats on the South side of the river in a bit of a procession and there was a fair bit of shelter from the waves. I was heartened by the view of Tynemouth Priory which popped up sooner than I was expecting.

The finish was on the slipway at  South Shields sailing club and Sparky Walton and Jimmy Bridges who were in the last wave were the first swimmers home and rewarded with having a microphone stuffed in their face and being asked for their comments by a BBC reporter. I'm not sure if I could've been anywhere near coherent  at that stage but they made a pretty good fist of it.

I followed them home about an hour later  and after negotiating some pretty nasty rocks I did eventually manage to stand up. It must've taken me around about 4 hours 10 minutes to complete the swim.

I came away with impressive war wounds, including swollen hands and face, and some fairly nasty friction burns on the back of my neck and under my arms.

I reckon I spent around 30 minutes in the shower at the sailing club trying to feel human again (the one advantage of being the sole female swimmer was no queue in the showers!)

It was a fantastic day, the camaraderie and support from the rest of the guys was terrific and completing the course was immensely satisfying. As I drove home I was reflecting on Tony's opening comment at the briefing, and how he was dead right. It wasn't a mass participation event, over a mile in beautify scenery. It was a brutal 10 mile slog through an industrial wasteland in the company of a great bunch of blokes with fantastic support both on and off the water. it might not be the Great North Swim but it certainly was a Great North Swim.

We also raised over £3,000 for the RNLI there's still time to contribute via http://uk.virginmoneygiving.com/team/tyneswim2013