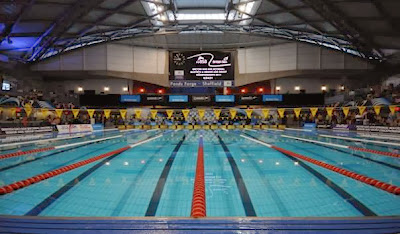 Well I missed some fantastic action from Friday's sessions, with some incredible swimming including a couple of world records for Loughborough's Olympic swimmer, Amy Smith who made her Masters debut in the 25 years 50 free and rattled out a 24.73 to add to her senior age group record from 2007.

In the 40 years age group Kiwi, Kirsten Cameron of East Leeds demolished the 1500m world record recording a 17:04.61 and collecting the 800 world record with her split time a mere 30 second improvement.

So from the sublime to the ridiculous, my first event was the 50 breast, and I have to confess I was feeling pretty ropey after my late and alcohol fuelled evening. Also since Eindhoven I reckon I've put on about 10lbs in weight and struggling into the racing suit was a painful and patience sapping experience.

Now that Fiendish FINA organisation have changed the breaststroke rules and over a 50 metres there are now two further opportunities to be dq'd!

I was therefore being ultra cautious at the start mindful of this so I politely let everyone else dive in before I followed them and then completely buggered up my stroke count approaching the turn and was all over the shop at the finish. Aargh...

I made the fatal mistake after the swim of going to the loo and removing the racing suit, only to be completely defeated trying to put it back on, so I swam the 200 free in an illegal suit. Managed to avoid the eagle eyes of the officials though.

Note to self must do more (or even some) training!