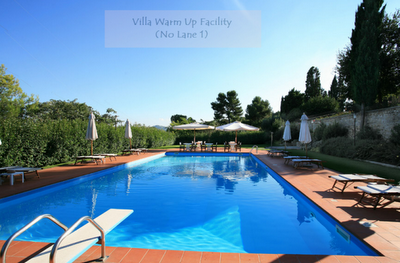 Relay day at the Worlds so Binge spent the day recharging her batteries and lounging by the pool, it counts for a swimming day as when I overheated I was able to flop into the pool to cool down and I reckon that I must've covered a whole 60 metres.

Eventually made it down to the pool to collect one half of the Karate Kids and head off for some altitude training in San Marino. It was great to escape what is rapidly becoming an endurance event.

Apart from the huge numbers of entries at this event one of the reasons it has seriously overrun has been the inability of swimmers to estimate their times. I reckon it speaks volumes that the Women's pool has pretty much run to time but as you Binge devotees are aware it's the men's pool that has had all of the problems.

What is it about Men that they have to be overly confident about what they think they can do! I have to say particularly (at risk of being racist and offending our hosts) Italian Men there are huge numbers of them that swim not only slower than their entry times but scads slower than the event entry times, optimistic or what. 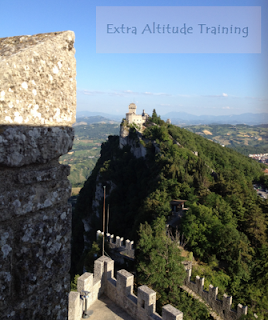 One of the other interesting features of this meet is the guy with a horn, or rather a cornet who pops up periodically to serenade the swimmers with such musical classics as the theme from Flipper, the Birdy song and the fanfare which calls American racehorses to the starting line... And they're off...

Well 200 Breaststroke up tomorrow which is going to be exquisitely painful and a further consignment to bl**dy lane 1. So I'm off to bed.