It's all over, a real lack of commitment in the 200 Breast this morning a very relaxed and unmotivated 3:23. Put me in 10th place for a putty medal and another rubbish swim from Lane 1.

At least the Brits appear to be improving their results. Meritorious Jen smashed the opposition to win the 60 years age group and Dave Milburn also struck gold as he became the first male British Champion (as far as I'm aware)

It is kind of interesting this meet, I haven't fully trawled through the results but there have only been a handful of world records, however apart from the odd phenomenal swimmer (who sadly all seem to be in mu age group) the depth of swimmers has been astounding.

Many of our swimmers who would normally be shoe ins have struggled and British World Champions are very few and far between. With somewhat predictably Jane Asher (the dasher)landing 4 titles to date, and Nic ( we are not worthy) Latty providing a master class in how to beat very tall opponents including Olympic Champions (Claudia Poll). The answer in case you are interested is even pace swimming. Nic went out in a controlled 34 and came back in an even more impressive 34 passing the whole field.

I'm back on the sun lounger at the moment experimenting with blogging on an iPad which explains the poor grammar and spelling and somewhat erratic punctuation. 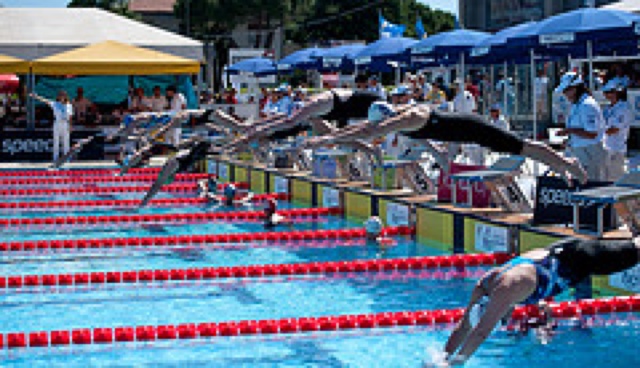 Email ThisBlogThis!Share to TwitterShare to FacebookShare to Pinterest
Labels: Relay action from yesterday