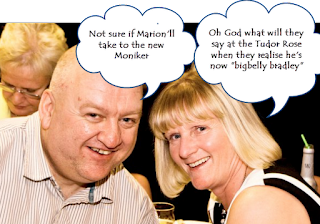 Had yet another hectic week and ended up not swimming, until this morning. Arrived at the pool musing about the unseasonably warm weather which had brought out an interesting pair of Bermuda shorts on the kid's coach who then began heckling me. He was obviously angling for a nickname and a guest mention in this blog.

I think he's operating under the delusion that getting a mention in this blog qualifies him for celebrity status. Watch out Graeme, Binge Swimming one week, the next you'll be contacted by the Beeb as a body double for Russell Grant in Strictly.

After some discussion between Synchro dad and myself, it just sort of popped into my head..."Big Belly Bradley". Now I may have to reconsider this in the future because the triple B is on a bit of a health kick and if my eye's aren't deceiving me there is considerably less of him at the moment then there was 6 months ago.

Anyway, a fairly steady technical set, with a teensy weensy bit of sprinting.