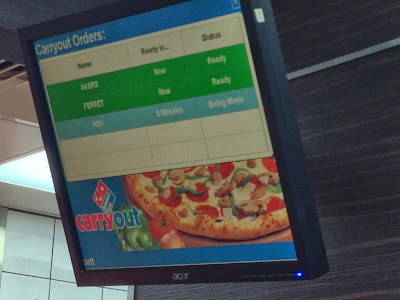 I've had an interesting weekend, which started on Friday, when I quickly abandoned any thought of cooking supper, resorting to our local Domino's Pizza place.

I'm not sure if it says more about my clarity of speech or the quality of the staff, but somehow Verity was transposed into "Ferret" by the weasel behind the counter.

Saturday was spent between work and the police station, where my hapless detainee had allegedly assaulted someone while they were taking a dump. You can imagine the fun the detectives had with that one. (I couldn't make this up could I?)

So could Sunday top that, well with the postponement of the Tyne River swim, the Tosser's (well the truly mad ones) were planning a training swim from Newburn to the Quayside. For some reason I thought this was a good idea. I turned up at the Quayside car park with the rest of the gang and we left our cars there and car shared to Newburn Riverside Park.

I'm a stranger to the riverside north of the Scotswood Bridge and I was growing increasingly uneasy as I realised just how far this was. The water was a chilly 11º and we broke into groups with a staggered start to try and keep the field compacted. Not as cold as the North Sea and I soon warmed up. The first obstacle was negotiating the rowing squads that were out on the water but we managed that pretty well and even gave a friendly wave to a tourist (I know it seems incongruous) pleasure boat. 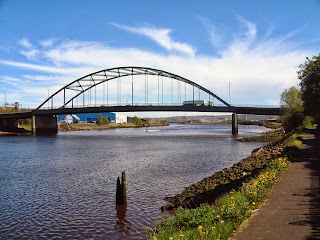 I had been informed by Open Water Guru Sparky Walton that we were swimming on a neap tide (the reality of that i.e no down stream current, hadn't quite sunk in at the time!)

The Scotswood Bridge seemed to take a long time coming and we were passed by the Kamikaze squad of Sparky Walton and Jimmy Bridges as we approached the bend in the river just before it, they were absolutely flying and disappeared off into the distance very quickly.

Rounding the bend there was a fair degree of chop and a horrible head wind. This made the stretch of river from the Newburn Bridge to Dunstan Staithes bloody hard work, and it seemed to take forever to swim past the old BAE systems tank factory. I know this may sound really obvious but you really don't appreciate how big the bloody river is or just how much water there is in there until you're stuck in the middle of it.

I was swimming with Joe and James who very caringly stopped every 15 mins or so to let me catch up with them, (thanks guys you were immense). We were all struggling on this stretch and every time I lifted my head to try and navigate all I could see was a wall of green water coming towards me. The gels I had stuffed up my wetsuit were gratefully consumed in this section, I wished that I had also included a Snicker's bar in a ziploc bag. 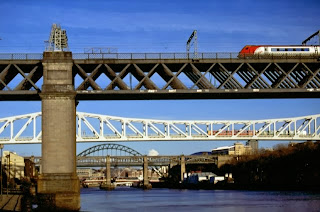 By the time we reached the Staithes (which took an eternity) spirits lifted, we'd been in the water for around 4 hours at this point and still had around 30 minutes to go.

I've never ever swum non stop for 4 hours and certainly not in those conditions. My left shoulder was really beginning to hurt and each stroke was pretty painful but my resolve to finish was strengthened by the sight of the home straight.

I knew that I was going to finish and plodded on painfully as Joe and James set out on the last lap. Despite the pain in my shoulder that final stretch is just something else. I was ticking off the bridges as I swam under them, mercifully the water was much calmer here, the Redheugh, the King Edward, the Metro bridge, the High Level, the Swing and finally the Tyne. You really appreciate how big and solid they are as you swim under them as an insignificant speck. 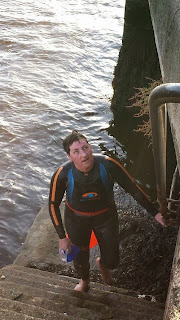 Teenage Triathlete caught up with me on the riverside walk beside the Copthorne and shouted encouragement the last few hundred metres. I tried the odd bit of backstroke on the swim in as it seemed to ease the shoulder. I was also a little wary of missing the steps outside the law courts where we climbed out, but a bit of dog paddle and breaststroke and I made it.

I have never been so pleased to set foot on solid ground all I had to do was walk barefoot to the car in the Quayside car park. It was just a bit surreal to be wandering across the front of the law courts, and sitting on the steps of Great Coffee, rubber suited, shoeless and dripping wet while Teenage Triathlete provided me with a much needed latte. Hopefully I was unrecognisable!

So I'm feeling pretty pleased with myself having endured that, the big question remains......can I do part 2 in a fortnight's time?