Final day of swimming today and the European Masters Championships ended with the open water event.

Sadly we weren't blessed with the fabulous weather we'd enjoyed all week, and as you can see from the pictures it was a little grim.

The build up to the race wasn't promising, some people take this sort of thing very seriously and had ventured downtown to have a look at the course, and the brave ones had even been in for a swim!

Tales of large patches of weed, general muckiness and oiliness abounded not to mention the Eindhoven authorities pulling a couple of old cars out of the water, and there were also some pretty ugly photos of dredging going on in the week leading up to the competition. This didn't dampen the spirits though.

We were in the Netherlands and therefore somewhat predictably the race was a straight 3km down a canal. No problems with navigation there then. The organisation was fantastic, from the shuttle bus service to the start, to the provision of your race pack, containing cap, timing chips (two) and tattoos (6)

Although one downer was the provision of loos at the start. As we queued for the ladies (there's always a queue in the ladies isn't there) we had a pretty good view of the guys urinals! Unfortunately as I reached the front of the queue a German lady came out proclaiming "no paper" I decided that with a little willpower my trip to the loos wasn't going to be that essential and joined the queue for the tattooing! eventually emerging from the registration marquee with my nails checked and the number 330 (my race number) tattooed on the back of both hands, both shoulder blades and upper arms; I was ready for the off.

I did however discover that just because you are marked up like Keri-Ann Payne doesn't make you swim like her....sadly. The start was at a rowing boat dock and marked by a lane rope which you had to hold onto. It was cleverly positioned in a rather large patch of pretty prickly weeds, and after navigating through them we were off. At the 50 metre mark I realised I wasn't going to be competitive so I settled down to a pretty leisurely pace and enjoyed the rather urban scenery. 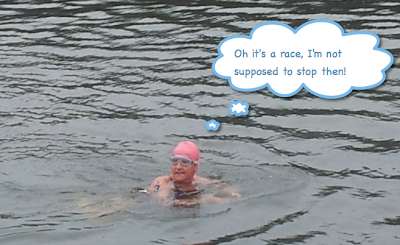 Having let most of the field bash on ahead, I found myself in a solitary and peaceful stretch of water, between the speedsters and a handful of stragglers. I was eternally grateful for this as despite being urged by the race referee to be a "good sport" there were some pretty dirty tactics going on.

As I approached the finish, I was becoming increasingly concerned that I would be run down by the wave behind me, (who started 15 minutes after us.)

Sure enough about 10 metres from the finish line the 60-64 year old guys came charging through and boy was that physical! Funky Trunks Riach was being bounced all over the course and was knocked off his line for the finish by the ultimate winner, an Italian with pretty scary eyes who looked like a Bond villain. You really didn't want to mess with him. 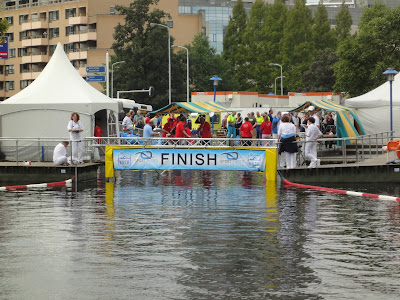 There was a great atmosphere at the presentation area and a last chance to buy EMSC 2013 merchandise. The site included the obligatory chip van (I have come to the conclusion that the Dutch national dish is chips!) Not to mention the beer vendor just to make sure that such finely tuned athletes could properly refuel.

The Brits had probably their most successful open water event with 11 medals so there was plenty to cheer about. Including fellow Tosser Nick Parkes who flew in just to swim the 3k and in a close finish out sprinted a German to win the 50 years age group. He was buzzing having come back to swimming 12 months ago focussing on thisl! A great way to end a brilliant week.