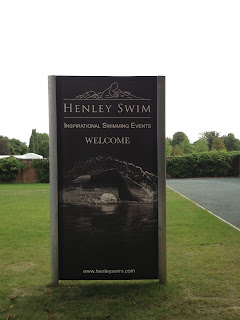 So where were you at 8am last Sunday morning? drinking latte and reading the morning papers? taking breakfast in bed, walking the dog, still blissfully asleep?

Well I found myself simultaneously in that rubber suit and the River Thames skulking under Henley Bridge (as you do). I did have company though with about 300 others awaiting the start of the Henley "Bridge to Bridge" swim. A mere 14 kilometres, quite a daunting prospect when the furthest you've ever swum in one go is is 5km (see here)

Now Bob, who of course has been on great Binge Bashing form recently has taken his training very seriously and done any number of 5 and 6 km open water swim, had given this event quite a lot of thought and came up with a cunning plan: Suggested that he was going to avoid the usual scrum at the start by hanging at the back and then just working his way through the field. 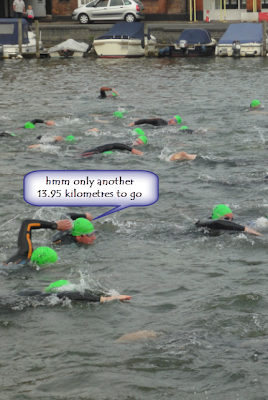 I thought this was a smart tactic and would stop me from going out too fast and at an unsustainable pace. So we hovered at the back until things got going, and then tentatively set out. The swim runs 14.1 km from Henley Bridge to Marlow Bridge. The Leander Rowing Club is the race HQ and has quite the poshest pre race bogs I've ever experienced. They still hummed a bit as the old flight, fright or s***e syndrome is seriously in play here

Now I'm still relatively new to these things but thought that the organisation was pretty good. The race has a mass start, and at the first feed station ( 4 km down stream) you are sorted into groups (rather endearingly referred to as pods). By then I'd settled into a comfortable pace and was swimming with people pretty much my speed.

The descent downstream was then controlled as you finish off the swim in your pod, whilst being shepherded down the river by a couple of safety canoeists, (who did a pretty good job of fending off pleasure craft and barges.)

There are 4 feed stations 3 of which are situated at points where you need to exit the river to navigate around a lock. The first feed station came up really quickly just as I was beginning to get into a decent rhythm, working my way nicely through the field. I had lost Bob by this stage and couldn't tell if he was in front or behind me.

By this point I was glad of the lumps of Mars bars, Malt loaf and Boost bars which were on hand in bite sized pieces to refuel. Teenage triathlete was doing a sterling job on the tow path as the support team and I was encouraged by the news that Bob was in the pod behind. 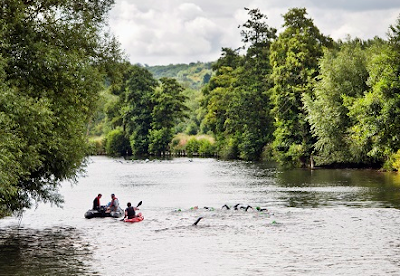 The next stop was at just over half way at Medmenham, and I was quite surprised at how rural the scenery was over this leg (at one point I even saw some sheep).

The third feed station popped up at Hurley Lock, by now we had covered 10k. After a cup of hot chocolate and more Mars bar I discovered some bits of Snickers amongst the offerings, I had no idea how divine the change in texture and saltiness of a peanut could be. 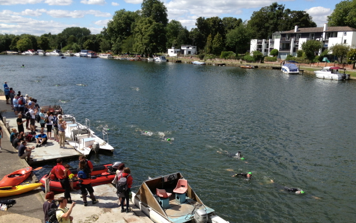 Hurley also presented the biggest challenge of the swim as to avoid the lock we had to swim across the southern most part of the tributary, climb out and then walk across a little island, (very painful on the feet despite the odd bit of matting here and there) and then re enter the water on the northern side below the lock.

The re entry point was very shallow and rocky and there was a tendency to wobble and stagger which of course only enhanced the pain. In the end it was all too much for me and I lay down in the water on my tummy and dragged myself into the deeper part, doing a pretty good impression of a beached whale, (I was a bit worried that Greenpeace might pop up and halt proceedings by slapping "save the whale" stickers on my bum) not a very elegant but an effective solution. 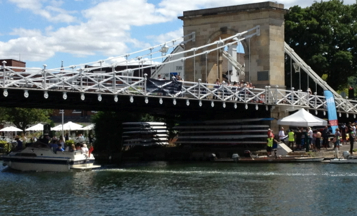 After Temple lock it was a couple of clicks to the finish and the usual spurt to the finish line as Binge discovers her leg kick.

I was pleasantly surprised how much I enjoyed the swim, there wasn't a single spot where I had thoughts of getting out.

I have to say however that by the end my upper arms were beginning to seize up and trying to lift my arms above my head for the next 48 hours was excruciatingly painful.

A great day out and well worth the effort as the natural order of swimming was restored in the Binge household as I watched Bob finish! which makes us all square at two each for the year!