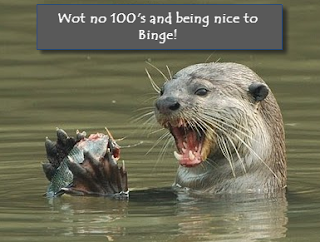 My comeback last month was just a bit short lived as it's taken me nearly a fortnight to face enduring the pain of a second session, but I couldn't avoid it today, having bumped into EMSC 1.0 in town yesterday and assured him I would be there.

I turned up (late) to be met by EMSC 1.0 collecting the fees, and he advised me that I was the only one in as the rest of the squad (proper hard swimmers in Consett!) had done a couple of miles at Ellington lake this morning.

Now I know the dynamic duo of Clarkie and Sparkie are down to do the waterfied version of the Great North Run in a couple of weeks when they swim from Newcastle to the mouth of the Tyne during the world's most popular half marathon. At a mere 10 miles it's a bit shorter than the run and probably a bit cooler. I had been following their training on Facebook and was dreading the ribbing I was going to receive for finally daring to show my face at a session.

Anyway survived that ordeal, as they'd obviously opted for the Great Outdoors leaving just me, Dazz and Queenie to plough through this rather benign little set. It may have been benign for them but it was torture for me, I was struggling to complete the technique swim within the repeat time and dipped out of one of the 66's on the 2nd, 3rd and 4th repeat.

Unsurprisingly I am regretting my slothful summer.