Computer say "No" (amidst Olympics, Floods and the usual summer madness) 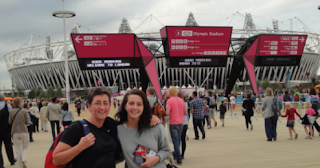 Hi there, so after an uncharacteristically quiet and unusually dry summer ( in swimming terms), I find myself in the rather unenviable position of not having swum since I left the swim down pool in Riccione way back in the middle of June.

That's not to say it's been a dry summer, far from it; in fact it has been punctuated by one or two moments of extreme wetness. I am of course referring to our fabulous weather.

Most notably this included a flood during the Geordie Monsoon season which was mercifully short this year, lasting perhaps 3 hours on the 29th June, but with devastating consequences as our driveway turned into a raging torrent, sweeping away, amongst other things a wall, about 4ft of road, 3 wheelie bins, the cat's hutch and my dad's car. For one short moment it looked like I would need to do some serious open water work across the garden if I wanted to access my house, which was at this point under about 9inches of water.


However all this palaver, the Olympics, a pretty awful chest infection and post world championship blues all contributed to about 12 weeks without a swim, now that is highly unusual because even on holiday I can flop up and down a leisure pool somewhere with the best of them. But as my summer holidays were spent in London, (I am forever indebted to Lesley Cook who very graciously provided us with somewhere to crash) our hectic schedule didn't allow any surreptitious dips, and tonight provided the first opportunity to get back on track with the 2012 swim challenge.

I turn up at Blaydon, dived in, or rather jumped (for elf and safety reasons) and set off up the pool, that first 25 felt pretty good, strong and sensuous; but oh dear elephants, pianos and any other entity of large mass you care to name came crashing down on my back just after the turn. I became completely demoralised when in a set of 5 x 200's I swam 3.10, (encouraging,) followed by a 3.25, (oh dear,) and finally after a 3.35 (woeful) I decided that discretion definitely was the better part of valour and called it a night.

If that wasn't demoralising enough I returned home, fired up the laptop and clicked on "2012 swimlog" my absence has caused havoc with my mile a day schedule I not only find myself having covered only 40% of my challenge in 66% of the year, but the question "Is it a sensible target? is now answered with a rather resounding "NO" and my forecast distance for 2012 is a mere 371,000 metres... 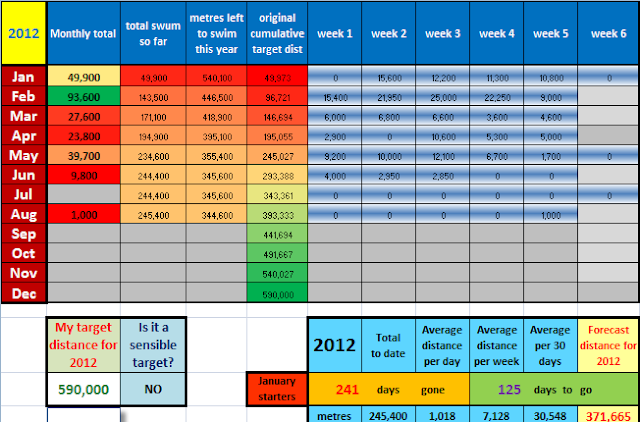 Need to get my act together, but somehow I know this is going to be very painful; Olympic inspiration is needed but as Chinese Philosopher Lao Tzu said " a journey of a thousand miles starts with a single step"
I feel a mega binge coming on.
Tonight's session for what it was worth:-


* should've been 5 of these but called it a day after I missed the repeat time....Wuss
Posted by Binge Swimmer at 23:26